Rolling Back Time at Age 65

For the best example of Facial Exercise Before and After pictures, we want you to meet Facial Flex user, Catherine Johnson, age 65! Amazing isn’t it?

A letter, a facebook post, or an email, none are uncommon ways for us to get to know our customers. Recently we received an email from a Mrs. Catherine Johnson, an enthusiastic Facial Flex user, who wanted to tell us about how Facial Flex has served her life — internally and externally.

Here’s what she said in her email:

I have been using the Facial-Flex since 2009 with great results.

I am now 65 years old and am told I look more like 50…as a matter of fact I really believe that the Facial-flex had a lot to do with it.

I just wanted to let you know that I am a very satisfied customer and if you needed a spoke person for your product I would be glad to participate.

When we looked at those attachments, we were blown away! Indeed, she had included in her note a couple of very convincing facial exercise before and after pictures… 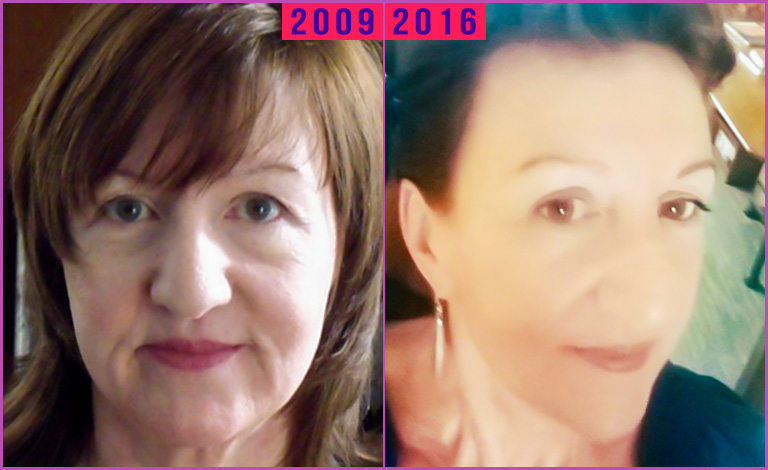 Aren’t Catherine’s facial exercise before and after pictures amazing?

A girlfriend, who worked in PR, had noticed that Catherine had to be doing something right on account of her face and attitude. She motivated her to get in touch with us. “I thought, ‘that’s not a bad idea,'” Catherine said.

Catherine isn’t usually the type to go out of her way to give a testimonial on her Facial Flex results. It’s more her style to just put her best foot forward without overthinking things in the hope of living the fullest life possible. Her story shows that and her decision to pick up Facial Flex builds on that theme. Though a youthful spirit is even more important than a young face, she made sure to point out.

We were happy she took her friend’s advice and shared her Facial Flex results. So we picked up the phone and returned the favor, calling her at home, which we learned was North Florida’s Amelia Island.

She was just on her way out to the beach, but was gracious enough to give us more than a few minutes of her time. She told us a little about her, and also Facial Flex’s role in helping her maintain a positive outlook even through difficult times. That’s become her hallmark. 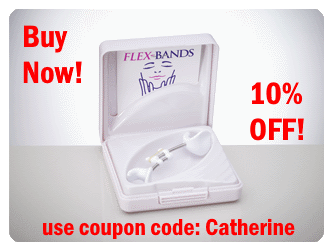 She moved to the United States in 1974, and when she did she found much to fall for—including a handsome husband from Rhode Island.

It was apparent in Catherine’s voice how sociable she is; how extroverted: How she draws in energy from her face-to-face interactions with those around her. That helps explain why the restaurant business has been such a good mold for her. She’s spent virtually her whole life working in it. She’s worked every type of restaurant job there is to work.

That in fact led to her and her husband opening a small successful one in the white mountains of New Hampshire, the Gypsy Cafe. He was the master chef. She made the drinks.

It was a happy little place. They were famous for their tropical margaritas, in addition to a few specialty plates. They did very well. For Catherine, this was truly the American dream.

Some time later, however, they were rocked by a grave diagnosis. Catherine’s husband had a brain tumor. They decided to sell the business and leave New Hampshire. Sadly, he passed away in 2008.

This is where we see Facial Flex’s first foreshadowing. Catherine was now alone. She felt desperate to find something to revive her faltering spirits. “You know because I was alone I started to look at myself and I thought I was getting old,” she said.

She felt insecure; an alien feeling. That’s when she caught a TV commercial late one night for a “mini” facelift. She called a local plastic surgery office and went in for an interview. “You’ll like this story,” she told us.

“I actually put some money down and then as I was leaving this one person came in and she had all these bandages around her head…She looked like she was in serious pain. I was like ‘Ooooh red flag…'”

“Then reading more about it,” she continued. “I found out, actually, that if I went through it and something happened—if something went wrong my insurance would not cover any of it after the surgery.”

She got her money back, but that didn’t help the way she still felt. She might’ve felt worse, in fact.

Later, surfing the net, Facial Flex popped up randomly. “I thought to myself. Oh yeah, I was looking for exercises for my face. I am in very good shape physically and I exercise…I said the face should also exercise…So I found some exercises you can do but then I found this little device…Facial Flex.”

Since that first day it arrived in the mail, she’s used it, literally, everyday. Like everyone else we ask, incorporating it into her day is not difficult. “I brush my teeth—and then I use it. It’s part of my routine.”

Cosmetically speaking, Catherine believes Facial Flex did more than just work her facial muscles. “Another thing I liked was that it kept my lips really nice. I don’t know but I felt my lips were fuller by using it. Again it was probably the blood flow.”

“Additionally, in those seven years, I’ve noticed that my jawline is not drooping like other women my age,” she added. “That’s also great!”

The point is, by helping her feel rejuvenated, appearance-wise, at a vulnerable time in her life, her Facial Flex results helped her rekindle something vital. A part of herself she felt in danger of losing.

Her confidence. Her lust for life.

It was also during this time that she felt motivated to finally go ahead and get her official American citizenship. While her husband was alive, she was a permanent resident (green card holder) but not yet a citizen. But this was her home now, and she didn’t want to leave.

Catherine today is mostly retired, and she’s always looking for new ways to keep busy. In addition to volunteering with the elderly, trying to give them an added verve, themselves, she’s recently landed a bartending gig at a local beer-and-wine place. “It’s perfect for me!” she said. They like her enough that they let her choose her hours.

This goes to show that Catherine doesn’t just look young. She lives a younger life.

“Absolutely I feel totally confident. Even with my age, who would think of a bartender at age 65? You’d think people would question that, like, ‘what is she doing over there?’ I mean I look good and I have a good personality and that helps and I’m comfortably myself…”

It certainly does help. And that’s just what we, at Facial Flex, wanted to hear.

So with that, we let Catherine get on with her day. She had her beach umbrella and book packed to enjoy a day to herself. But she was open to more. “Hey, who knows, maybe there’ll be a nice guy,” she laughed.

Are you a Facial Flex user? Do you have your own Facial Exercise Before and After pictures? We would love for you to share those with us. Call us at 800-469-3539.