Shattering the Model Stereotypes and Restrictions

Windy Ayn Duncan is best known to the world through her Youtube persona/channel, Ayn Los Angeles. On her channel, which she started in 2015, she aspires to give back by letting others in on her secrets for owning and maintaining a youthful appearance—well past the sell-by-date.

Ayn, as she goes by in her professional life, has years of experience working in the beauty industry, both on the front and back end. We’ll discuss that, but first we think it’s important to note that Ayn is about much more than just a neoteny of looks. Maintaining a youthful self-interior is at the forefront of her outreach.

In November of 2015, she posted a video to her channel that caught our attention. It was titled: Facial Flex: All Natural Face Lift: 10 Year User.

A faithful facial flex user since 2004, Ayn was kind enough to call us from Los Angeles to discuss not only her story, but how Facial Flex helped her realize a vision that could be empowering for everyone, not just models. It’s this vision that has defined her life.

It’s our hope here that her Facial Flex face lift story will empower you.

We started our interview by asking her about the videos themselves. What was her thinking that pushed her to take her shapely face to the YouTube-verse.

“If I died all the hard work… where does it go? Everything that’s up in my head, it goes nowhere. Looking young and fit, feeling good and also having good mental health… How to deal with depression. How to deal with stress and cope with relatives. Feeling good on the outside and inside.” These are all topics of which, she says, she’s spent years trying to reach the bottom.

She was encouraged to discuss the personal benefits of Facial Flex on her channel after a Social Media group which she was a part of, one that included an internationally recognized dating coach, began inquiring about how she did it? How she stayed so young-looking. They knew her actual age. They also knew from talking to her that she was against surgery or injecting herself with chemicals.

Ayn’s life experience has been quite varied. To be more specific, many of her videos touch on what you’d expect: Makeup, hair, dieting, cooking, where to buy tasteful home decor at reasonable rates. But she also ventures into mental health and even, sometimes, the metaphysical (She’s currently earning her Masters degree in Psychology). Goddess stones and Vedic Astrology are just couple of examples.

Based on her interests, and those of her audience, in order for someone like Ayn to have an impact, her face must be on-point. It’s the window between her viewers and her library of knowledge.

Windows require maintenance—at least if you want them to be seen through. Ayn’s face needs to be firm, her features sharp. “You exercise other parts of your body, like your triceps for example, why not your lower face?” Ayn says. “It’s just an extension of that…”

She’s not just being vain, either. The heart of her story which, really, is a philosophy, will explain why. And we’re proud Facial Flex is part of it.

We’ll start by letting Ayn say this about herself: “I’m a multi-passionate person,”

Her message can resonate with anyone. In addition to acting and all the years working the runway, she’s also worked in media, writing and producing programming related to news and business. Now in her 40s, as mentioned before, she’s back in school, where she’s maintained a 4.0 GPA.

She first got her taste of the spotlight as an adolescent, landing national commercials. As a teen she transitioned into runway modelling. But when she entered her twenties, she decided to take a more traditional career route. She was probably following “conventional wisdom” she heard spouted along the way. That women simply didn’t have a long shelf-life. So she switched careers.

She liked her job. The work was mentally stimulating but, somehow, her life didn’t feel as invigorating.

But she had crossed the 30-year threshold. Careers for female professional models end at 26. That’s what she was told at least.

Ayn decided she didn’t care. When conventional wisdom says you can’t do something, it takes unusual conviction, and courage, to say otherwise. It wasn’t a question of compensation.  “I was making a lot of money at my television job,” she said. When it comes to modelling, she says: “It’s just fun!”

When it comes to critics and their words of wisdom, she says: “Well they can stick it up their you know where. In life there are no ‘shoulds,’ you know—there are many people that make these boxes that they like to put people in…”

Ayn still worked her regular job during the week. But on the weekends she took to the runways, sharing the them with girls who were 14, 16, 18 and women in their early twenties. It turned out that modeling was her artistic outlet and, having given it up, her self-expression was stifled.

What is life without passion?

In her words, what she does on stage amounts to “wearable art, wearable fashion and you’re on a stage and on a show performing…I would’ve done it for free.”

She refused to let age act as a barrier. Literally. She fudged her age on her resume, claiming she was 26. She has no reservations copping to it. She hadn’t discovered Facial Flex yet. She was just relying on good genes…

Things were good. She was getting booked 30 shows a year, working with a famous designer. Some shows she participated in landed on the E! channel. But she knew, still, she was on borrowed time. She was heading deeper into her 30s. For how long could she keep saying she was 26?

She was 34 when she saw the infomercial late one night while surfing TV.

“The husband and wife, they were in their 70s and former models—They had used it their whole life,” she says. “You could see his face was very sharp, he had really high cut cheekbones and and their faces were so sharp and nice.” The woman was similarly attractive. 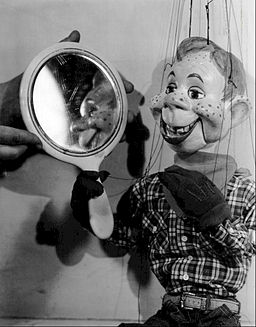 The infomercial came at the right time. “I was beginning to see the “Howdy  Doodee” lines around my mouth,” she says.

Because their faces looked the way they did, she took the older couple at their word. Facial Exercise, it turned out, was an overlooked aspect of overall fitness.

Athletes and other body builders push to enhance their muscle strength to the fullest by challenging their muscles with an increase in weights as they build strength and contour their desired muscle groups.  Facial-Flex does that to your face.

“After about two weeks I could see my face lifting. The first time I used it I felt my cheeks get sore. I could feel the soreness. I would do it and my mouth would get to the point where I couldn’t do it anymore—and then I’d try to do it like 15 more times.” To paraphrase Arnold schwarzenegger in the 1977 documentary “Pumping Iron,” it’s those extra reps that make a champion.

“Ageism is real,” she says. She’s shown she’s ready to combat it.

To those who’re turned off by the prospect of adding a new chore to their daily regimen, it should be noted that Ayn doesn’t use Facial Flex everyday. The Facial Flex face lift is like any type of fitness, she says. It needs to be cycled in and out.

“I do this in spurts of about three weeks, to help my face get a lift basically and then after that I do it intermittently about twice a week and I see it get lifted, like super lifted. Then I  won’t do it for a few months. Then I notice that my face is puffy and I go, “Wheres that facial Flex?”

The bottom line is this: Not only is Facial Flex far better for your body than other methods used for keeping our faces looking younger, it’s less costly. A one-time small fee versus the many more dollars you’d pay for a one-time Botox session.

“If there is a tool you can use that’s only like 45 bucks, and it’s an all natural product, why wouldn’t you use this?” she says. “You can have this thing for I don’t know how long. I’ve had mine for 10 years.”

Ayn’s still doing what she wants. Right now, she’s focusing on transitioning back into the acting world. However, she’s leaving the door open for a return to the runway as a mature model when she’s in her 50s or 60s. Who’s to tell her she can’t?